A couple weeks ago, my friends from the #LetsTrySomeWhisky group on Twitter joined me to the third tasting I had prepared a long time ago (just before my trip to Scotland, a year and a half ago!) Yes, three tastings in 18 months, you cannot think we overdo things, except taking our sweet time. Anyway. Our first tasting was about Yoichi single malts, while the second was about trying a few French whiskies. And this time? We were going to taste 4 Balblair single malts, one independant and three official bottlings, all around 10 years old. Only difference from the first two tastings we did : this time we would not do it blind. Why? Well, it’s a bit hard to discern a 10yo Balblair from another, right? I won’t present here the distillery as I usually do, as I’ve already covered a bit about Balblair in the two 1979 Balblair reviews I published, one for the official bottling, and one for a bottling by Gordon&Macphail. So let’s get directly to the point, shall we?

The Balblair tasting with friends lineup

As I said, the theme this time was 10-ish year-old Balblair. We were going to try three official releases from when Balblair was using vintages, and one independent 10yo Balblair bottled by Gordon&Macphail.

The first dram of the evening was a Balblair 10-year-old bottled by Goldon&Macphail, probably in the 1990s or early 2000s from what I could find. I had bought this bottle on an auction and unfortunately it didn’t have any barcode or engraved bottlecode I could find, so that didn’t help to identify the period. This Balblair has been bottled at 40%, and probably coloured and chill filtered. I paid £35 before the biding winner premium in December 2018 for it.

Grassy and sweet, with honey and barley sugar, as well as hints of citrus and jaffa cakes.

There is a spicy arrival, with cinnamon and a pinch of pepper. Then the barley sugar from the nose comes through with typical American oak notes of vanilla and caramel, with a slight bitter note of lemon juice. Unfortunately, the mouthfeel is quite thin, no thanks to the low 40% alcohol by volume this whisky has been bottled at.

Short, woody and spicy, with some chocolate.

It could have been really pleasant with a few more percent of alcohol. Here, the spirit is not strong and bold enough to compensate by itself the heavy reduction made by Gordon&Macphail before bottling, and it’s a shame. It lacks complexity, it also lacks body and personality. Easily sippable, but also unfortunately easily forgettable.

The second dram of the night was the Balblair 1997, bottled in 2008 after spending 10 or 11 years in first fill bourbon casks. Bottled at 43%, without colouring but with chill filtration, I bought it on auction in October 2018 for £55 before premium. Probably more than its original RRP, but I do like Balblair…

A bit “deeper” than the GM. Similar notes but cranked a notch up or two. Barley sugars, vanilla, citrus (orange peel, maybe clementine too), and lots of vanilla.

Sweet and spicy arrival, peppery, then the fruits charge through: lemon, orange, clementine, with vanilla sugar and a slight bit of woodiness. There’s a dusty feeling too.

Spicy, with lots of vanilla, a bit of wood, caramel, and a warmth staying at length on the tongue.

Quite an upgrade from the GM to be honest. Nose and palate are richer, more flavours I was able to pick out, it’s way better. While it was bottled at the better-than-40-but-still-not-as-good-as-46 43% abv, the mouthfeel is not too thin, the palate is not watery, and the spirit has more latitude to express itself. This is fresh, easy to drink and complex enough not to be immediately forgotten, far from it.

Okay, let’s talk first about “releases”. When Balblair was using vintages, they would consider an expression is a 2nd or more release when the flavour profile, for a specific vintage, would change enough to be considered another whisky. It would also happen for example when they would release a specific vintage, a first expression let’s say at 10 years old, then discontinue it after a few years. Then they may release a new version a few years later, for example at 18 years old. Since it was quite a change from the first release, they would call it Vintage XXX 2nd release. Then sometimes they would even go to a third release later, as we had with the fantastic 1991 3rd release for example. Here, our third dram of the night was the Balblair 2nd release, but… they were two second releases! The first one, the one I have, was… released in 2011 for travel market, as a replacement of the previous vintage 1999, and was matured in American oak barrels. But in 2017 Balblair released another vintage 1997, this time at 18yo, but they also called it 1997 2nd release, and it was finished in Sherry oak butts, unlike the 2011 one only matured in American oak. Still following? Okay. This Balblair 2000 first 2nd release, as I said, was bottled in 2011 for my own bottle, at 43%, without colouring but with chill filtration. Like the two previous bottles, I bought this one on auction, in December 2018 (at the same auction than the GM in fact), and I paid £50 for it before hammer premium.

Very different from the first two, very fruity (pears, apricot, orange). Also, some dough, maybe yeast, even thinking of some citrusy hops. Getting lots of hay too.

Vanilla again, lemon curd, honey, with a very slight saltiness. Spices are here too with cinnamon mostly, and barley sugar once again, though more discreet than on the GM and the 1997. This is sweeter too, and with a thicker mouthfeel.

Citrusy and woody, caramel and vanilla, and perhaps grapefruit.

At first, when I opened that bottle, I wasn’t convinced by this release. And the several drams after, over a couple months at least, didn’t convince me either. Then I filled the samples for friends, and after the bottle spent a bit of time half-full, I do like it way more than before. Is it because the spirit needed time and a bit of air? Is it because with time and the “progress” I’ve made on my discovery of whisky and the “training” of my nose and palate, those last two changed as well as my tastes and it was now ticking more boxes? I don’t really know to be honest, probably a bit of everything. Anyway, I really liked it, with its fruity and cereal…y profile, what I expect from a ex-bourbon matured Balblair.

Last but not least, the latest official core-range expression from the vintages era was the Balblair 2005. Bottled at 46%, in 2016 in the case of my own bottle, it was naturally coloured once again, but also this time non-chill filtered. Once again, the maturation was in ex-bourbon barrels. I think I paid around 50€ for it at my local liquor shop around 2016 or 2017, I don’t remember exactly, and I wasn’t keeping a Google Sheet with everything whisky at the time.

Alcohol is stronger here, you can feel the 3 extra percent as it’s now 46% abv. The nose is doughy and fruity and grassy, floral too, with a bit of nail polish remover. Great nose.

Aaah I missed this one so much. I’ve always loved it and was gutted when the bottle was killed… but it was for a good cause since it was killed filling samples for this tasting! Citrus, apple purée, poached pears, caramel and vanilla, some wood too but not too much.

This was a perfect entry to the previous core range, right before they dropped vintages and went instead to age statements. And finishes like almost any other distillery. The rise to 46% was a great decision, helping with the body and enhancing the flavours. Tons of flavours, delicious nose, very fruity palate, I really regret not having a backup of this one. I miss this bottle (though I’ve kept it, empty, with its beautiful two-doors blue box, for sentimental value). The vintages, to be honest. I need to find myself another one.

Another great moment spent with friends, tasting whisky from a distillery that has a special place in my heart. As we were going from older to more recent, the whisky evolved, was getting better and better, to top it all off with the vintage 2005. This evening with friends, though socially distanced (by quite a lot, the closest one was a few hundred miles away!) was once again the proof that whisky is better when it’s shared and drunk with friends, so that we can dissect it together, exchange our views and findings. Can’t wait to be able to do that in real life again.

As usual, different people may have different opinions, so I encourage you to read what others have thought and written about those drams. Brian @MaltMusings was there on that tasting and wrote about it already, and on his blog you’ll be able to find most of the tweets of the evening with the notes of everyone. 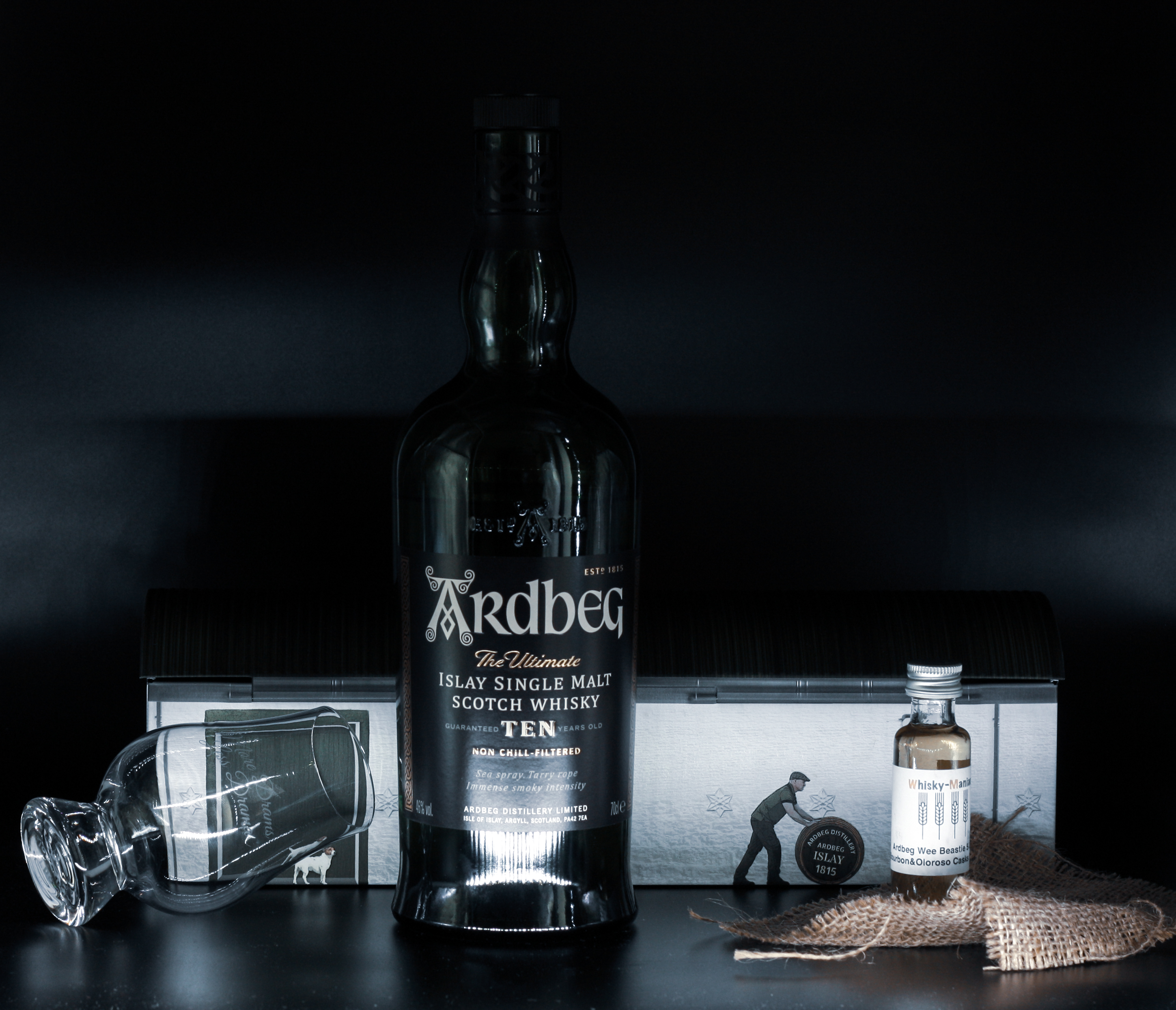 SMWS – Come in here, dear boy, have a cigar