I am a proud member of a private Twitter group of whisky fans called The Whisky Circus, created at the beginning of the lockdown my Sorren “@ocdwhisky” Krebs, a well-known whisky blogger and now a brand ambassador for The English Whisky Company. The Whisky Circus is about 50 members big from several countries (UK obviously, but there are also people from Ireland, France – this humble writer included, Belgium, Sweden, Norway…). We meet every Sunday afternoon on Zoom and thanks to Sorren’s relations in the whisky industry, we now have one or more guests from the industry who come to discuss with us every week. Though you cannot participate in those Zoom sessions if you’re not a member of the group, you can watch the replays on Sorren’s Youtube channel, as our sessions are recorded for their most serious part. All the secrets from the trade, however, are not, sorry-not-sorry!

The English Whisky is the brand name of the whisky distilled by St. George’s Distillery. Located near Roudham in Norfolk, England, it was founded in 2005 by James and Andrew Nelstrop, father and son. James, Andrews’s father, decided he wasn’t ready for retirement and wanted to open a whisky distillery before that. The planning was granted in 2006 and later that year, St. George’s Distillery was the first malt whisky distillery in England for over a hundred years. The whisky flowed from the stills for the first time in December 2006, and thus 3 years later, in December 2009, they released their first legal whisky, called Chapter 5. Before that, they released young not-yet-whisky malts called Chapter 1 to 4, and opened their visitor centre in 2007. Since then, many other chapters were released, with peated and unpeated malts, and even triple-distilled whisky. However, they recently dropped the Chapters name to more classic release naming.

While being the oldest English distillery of recent times, they’re still quite small compared to their cousins from Scotland. The distillery uses barley grown in the Norfolk surroundings and mash it in a stainless steel semi-lauter mash tun with a copper top. The mash goes then in one of the three washbacks, also made from stainless steel, where it is fermented for 96 hours on average. The wash is then sent to the single pair of tall stills. Having tall stills helps getting a light, fruity and floral spirit. The wash still has a capacity of 2800 litres while the spirit still has a capacity of 1800 litres. The new make is then filled mostly in first- and second-fill ex-bourbon casks obtained from Jim Beam. However, they also use other types of casks, either for finishing or full maturation. The casks are then racked 6 to 8 casks high, laid on their side, in the warehouse. All expressions are natural coloured and unchillfiltered. And talking about expressions, enough talked, let’s get to them.

The Original is the entry-level of the English Whisky’s core range. Matured only in first and second-fill bourbon casks sourced from Jim Beam, in Kentucky. It is unpeated, uncoloured, and though it is bottled at only 43% abv, it is unchillfiltered. Kudos for that. The average age of the liquid is probably around 5 to 6-year-old but the expression is released as a Non-Age Statement (NAS). You can find it for £42.50 on the English Whisky’s online shop, or for only £36.83 on Master of Malt and £39.95 on TWE. In France, it will cost you 58€ at LMDW when they have some, which is a lot.

The arrival is very sweet and a bit thin. After a moment, some spices (a touch of ginger) come along, then almonds, citrus and some kind of chalky texture.

Citrus and almonds with a warmth in the throat, medium in length.

I tried this whisky a few months ago, from an older miniature, and I wasn’t impressed at that time. However, I must admit I’m liking it way much now. As I had some left from my previous Original miniature, I compared them, and the older one was pricklier on the nose and still very citrusy. The palate of the older one was thinner and sourer, less enjoyable. Batches differences are well known, and I hope new batches are more like the one we tasted with the Circus. I do like this entry-level expression.

The second dram we tasted was this brand new expression publicly released just 3 days before (on the 4th of June 2020 to be exact for you beloved nerdy readers). It’s not made with the oldest whisky maturing in their warehouse though, so I guess we can expect older expressions soon(-ish)! Like Original, it’s matured in first- and second-fill ex-bourbon casks sourced from Jim Beam and there may be a bit of peated whisky in the vatting. While it’s not the oldest whisky they released, it is the oldest with an age statement (the other one was with a vintage year). Bottled at 46% abv, it is once again unchillfiltered and natural-coloured. The outturn was 2466 bottles. It’s sold £59.95 on the English Whisky online shop or on the Little Whisky Shop, and it doesn’t seem to be sold in France for now, but 3 days after release it seemed to be almost gone.

Citrus is quite present upfront. This is pricklier than the Original. Hints of wood polish, vanilla, some orange juice and a slice or two of ginger next of sweet soy sauce mixed with wasabi. Maybe some kind of meaty notes too.

The arrival is very sweet and a bit thin once again. After a moment, some spices (a touch of ginger) come along, then almonds, citrus, caramel, milk chocolate and coffee. I retrieve the kind of chalky texture from the Original but it is less obvious. A second sip brings a bit of oranges, cigar smoke and some cracked black pepper.

Citrus, orange, pepper and almonds with a warmth in the throat and on the tip of the tongue, with a good length.

This expression for me requires a bit more work to peel the layers than with the Original, but there are definitely more layers. While it’s bottled at 46% abv, I didn’t feel at first a very different mouthfeel than the Original, though sip after sip I found it to have more texture. You can taste the age difference between the two, but it’s not immediately obvious, at least for me. While writing my palate tasting notes, they were at first word for word the ones from the Original, but then I didn’t stop as I was getting deeper and deeper in the layers while there was nothing else for the Original. It’s good but I expected a bit more anyway.

Smokey is another expression from The English Whiskey core range. Made with peated barley (45ppm) sourced from Crisp Maltings using peat taken from the mainland in Aberdeenshire. It is matured as usual in first and second fill ex-bourbon casks sourced from Jim Beam. You can buy it for £42.95 on the English Whisky’s online shop, £39.83 on MoM or £17.25 for a 20cl bottle on TWE. In France, Prestige Whisky has it on offer at 44.25€ while La Maison Du Whisky is as usual quite expensive at 58€.

The nose is immediately smoky, unsurprisingly. The signature citrus notes are still there but a bit behind the smoke. Cinnamon and vanilla do peek through that after a moment. It feels more than 43% on the nose.

The arrival is once again sweet thin then quickly becomes smoky, ashy and a bit peppery. Dark chocolate, aniseed and caramel syrup. Citrus is still there with a bit of grapefruit.

The finish is peppery and smoky, the smoke and ashy notes staying quite long on the tongue.

The nose is a bit too simple and overpowered by the smoke, but the palate is a bit more complex. The ashy smoky notes are completely in front on the palate, but there is more space for other flavours to be found. Feels about as young as the Original but quite enjoyable.

Thank you very much to Sorren for creating the Whisky Circus and organizing this English Whisky tasting, and Edward Milner for the beautiful photos of the miniatures. The full bottles photos have been shamelessly stolen from Master of Malt and the English Whisky website. 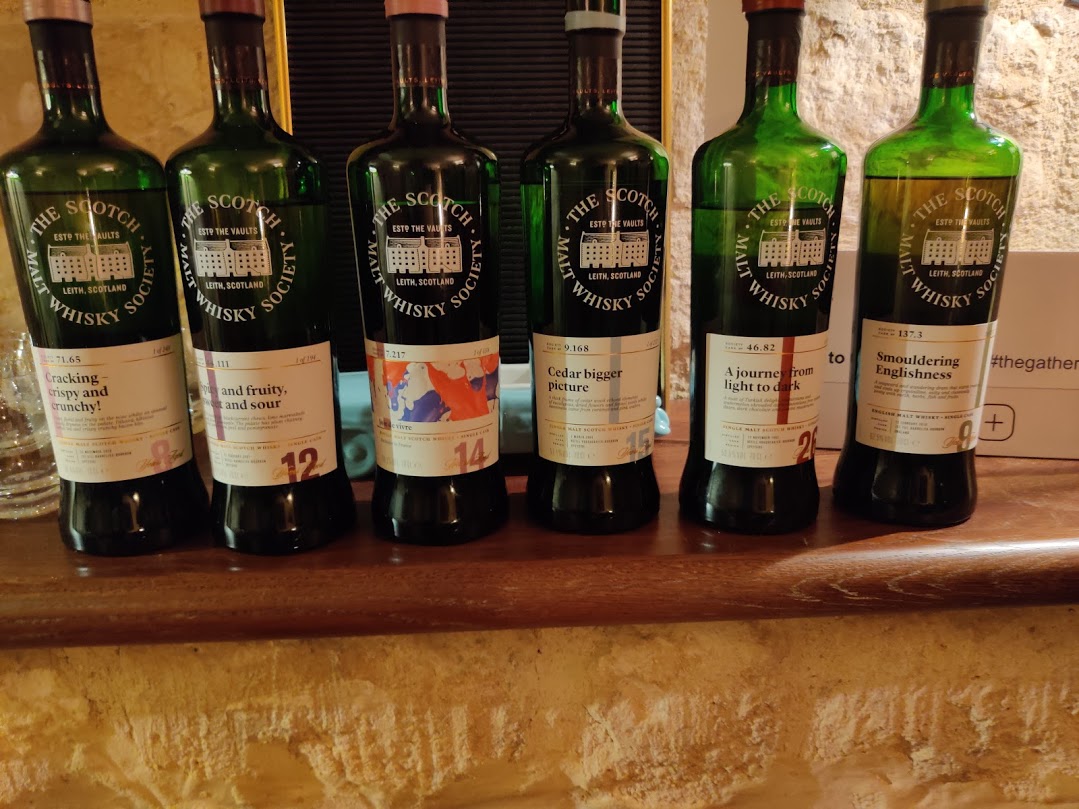